The other day I came across a photograph of one of our instruments while searching for something else entirely – a photograph of a very strange resonator ukulele: it was the shape of a small banjo uke but made of nickel plated brass.

This is its story… 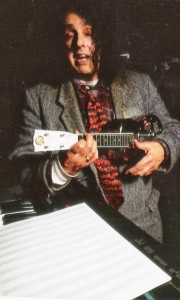 Peter Brooke-Turner and TT.
I think on the day he visited Peter
(photo courtesy of Peter) 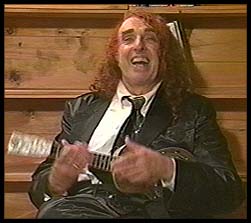 A Still from a Tiny Tim video “Songs and Stories of the Crooners”
Available from  www.ukediner.com

It was in the early 1990s, while Beltona Resonator Instruments was based in theUK, that we made a resonator uke for Peter Brooke-Turner who is a founder member of the Ukulele Orchestra of Great Britain. At that time, the Orchestra whilst being little known in the UK or in fact anywhere else, was very big in Japan but this situation was changing for it rapidly and they would soon become widely popular.

A couple of years later, Peter phoned me to say that Tiny Tim was in London playing a few gigs but was without a ukulele.  Someone had suggested he visit Peter as he was known to have one or two lying around the house.   The one that took Mr Tim’s eye and ear was the Beltona uke that Peter owned.  Tiny Tim used the uke for his gigs after it was retuned to play left handed.  A few weeks later, I received a call from Herbert Khaury, aka Tiny Tim asking me to make him a ukulele exactly like Peter’s.

You have to remember that at that time the ukulele was not a the wildly popular instrument it is today and Tiny Tim had kept it in the public eye almost single handedly since his heyday in the late 60’s and early 70’s.   He was the biggest living thing in the ukulele world to me.  I remembered him being on TV when I was young.  He was famously (or infamously) married on TV to Miss Vicki.  His version of the old Nick Lucas tune “Tiptoe Thru the Tulips” was widely loved.

Eccentric and lavishly over-dressed he may have appeared but he carried in his mind a vast repertoire of tin pan alley songs of love and romance unmatched today.  He was a walking archive of crooning tunes previously lost but revived and passed on to a new generation by Mr Tim.

We were thrilled to have received a commission from this colossus of the ukulele world.

When I was speaking with him he addressed me constantly as Mr Evans despite me being 30 years younger than himself. An old world politeness so rare today and indicative of his charming manner.